During our evening walk last night, a guy approached me with his 3yr old twins and asked “How old is your son and how did you get him biking like that?” It actually caught me off-guard. I’ve been asked the question several times before in passing but never really discussed it. But this time was different. The guy stopped, changed directions, and started walking with us anxious for an answer.

I didn’t know what to say. All I could think of was “We started him on a very small bike.” He said he bought small ones but the kids refused to get on. A year later, they still have zero interest. I stopped to think about it but within seconds the guy made a joke and they were back on their original path waving goodbye. I get it—I wasn’t very much help but it definitely got me thinking…

So here it is! My tips for getting your kid on a balance bike—if you ever happen to read this, Guy in the Park, this one is for you and all the answers I wish I had at the time 🙂

TIPS FOR STARTING ON A GLIDER BIKE

1.START SMALL—There are so many amazing glider/balance bikes out there that it’s tough to know which one to choose. Since we opted to start early (16 months) it eliminated quite a few options for us because most weren’t small enough. We settled on a wood bike from Mountain Equipment Coop (MEC). It was light, easy, and almost like a toy with plastic tires and a big seat (see below). If you’re past this point, check out tip #2. 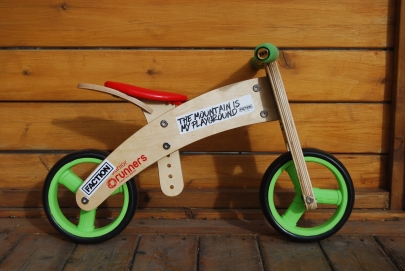 2. INVEST IN QUALITY—Bikes vary in price but I truly believe that in this case, you get what you pay for. Plus, they hold their value really well. Rascal Rides was a great resources for understanding why weight, design, materials, and features all make a difference in your child’s biking experience. Bike Dads also provides a great overview of different models and highlights the benefits of each. We prioritized weight and after a lot of debate, decided to go with a Spawn Tengu. They also have real, air filled tires, proper ergonomics, and an adjustable seat (just a few of the features we loved). 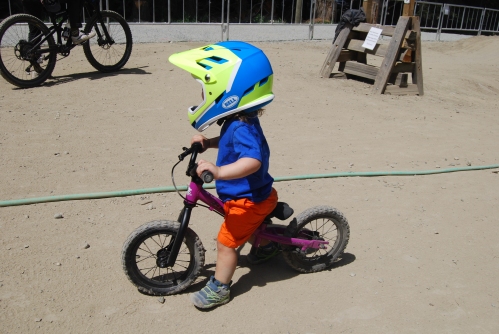 3.MAKE IT FAMILIAR—Initially I took it for granted that every kid would want to jump on a bike and start gliding around. I mean, the kids in the park make it look easy right?! But if you think about it, biking can be very overwhelming, tiring, and complicated to learn (especially for a little kid who just started walking within the past year!)

To get him familiar with it, we brought the bike everywhere (parks, camping, evening walks, in the house – oops). It isn’t always convenient to haul around an extra item (especially a bike) but when we saw other kids riding, we would point at his bike and put him on it. During our outings, we would also ‘check it’ multiple times and ask if he wanted to try riding it or have a break to spin the tires. Sometimes he’d drop it and move on, but other times he’d want on and take a couple of steps. Eventually his step count grew to 15 or 20 and soon enough he was asking to go on more and more.

If you’re not interested in hauling the bike around, try changing the scenery every couple of trys when you do go out with the bike. I don’t know what goes on in their little minds but some settings seem to inspire bike riding more than others and a new path might be just the trick! 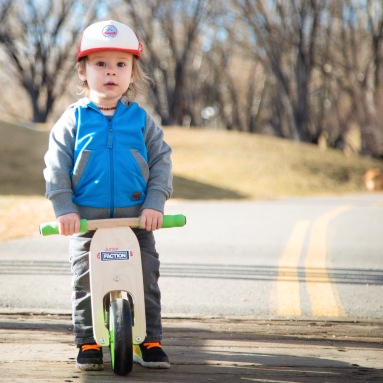 4. CREATE A RUSH—When walking seems so much easier without a bike, it’s easy for a kid to get discouraged. To give him an idea of what he was working towards, we’d tell him to “Pick up your legs and hold on” and then glide him for a short distance. You could see the twinkle in his eyes when he knew THIS was the real deal! Be careful though – it’s a slippery slope in turning this into a bad habit! I watched a mom run herself ragged pushing her 3yr old all around a bike park because the kid knew she could run him faster than he could bike! I recommend using this as a reward after they’ve given it a good try or a spontaneous act to create some playfulness. It’s important to not only reward achievements but recognize efforts as well.

5. ADVANCE SLOWLY—Once they are comfortable sitting and gliding on their own, you can progress by finding low-grade grassy hills and letting your kid go down. This helps cushion any falls and also naturally slows them down after getting a bit of speed. I’m continuously on the search for bigger hills to keep my little guy challenged. With a new baby in the mix, this is also a great activity where I can sit on a bench and nurse while he does rounds on the hill. (The uphill part is very exhausting aka. nap inducing).

Trail type can also have a big impact. Going from grass to pavement to bumpy trails means you might have to scale back your terrain level (yes, going back to flat) while your child adjusts. Which brings me to my next point… 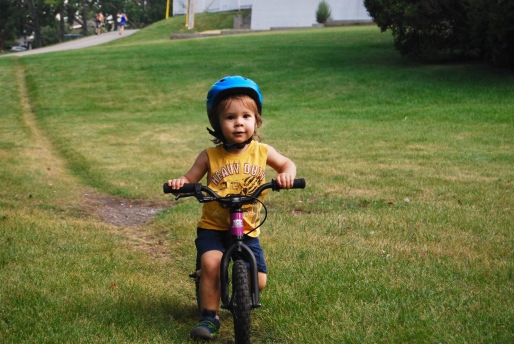 6. GET BACK ON—In cases where my son did fall, we’d tend to his needs, high five, and try to get him back on the bike. It helps to have a little fall routine. In our case, we brush off the knees, hands, high five, and get back on.

We never wanted to leave him with a last impression of falling. Use this at your own discretion though—it’s great if you can make them laugh and get back on but certainly don’t force them since this could create negative sentiments. 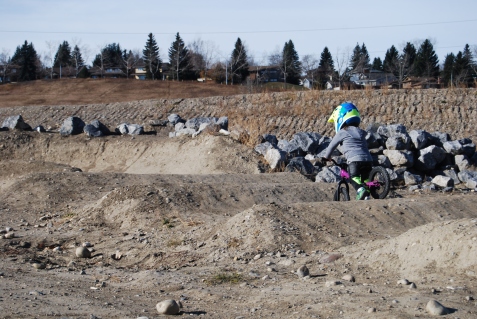 7. REWARD WITH LAUGHTER—On days when our son would take multiple steps or start to increase his speed, we would stand in front and pretend that we was going to run over us. When older kids whooshed by, we’d cheer and say “Let’s try to catch them!”. I needed a new bike helmet too so I got mine at the same time and we spent the day wearing them together around the house. Sometimes we throw down the bike and dance after a big milestone and regularly I run over for high-fives. At some point or another, each of us has also squeezed our butts onto the tiny seat to “ride” the bike as well. 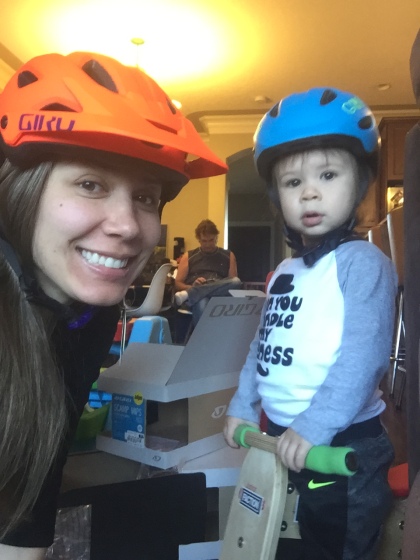 8. GET A HELMET—When he was barely walking with the bike, we never made him use a helmet but as he progressed, we knew we needed one fast. The first couple of times were a battle but we insisted “No helmet, no bike”. With my second child, I will definitely have her wearing a helmet starting Day 1. Read my post on ‘Why we Opt for a Full Face‘. We also bought a Giro kids helmet based on fit and their MIPS system. There are lots of helmet options—be sure to get out and explore.

Hopefully these tips help get you started! It takes time but is definitely worth the effort, especially when you see the progression (watch out, it happens quickly!)

Click here for some reviews on local bike parks in Calgary and the Rocky Mountains that you can visit with your child as they practice mastering this fabulous skill!